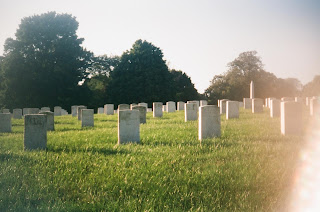 This was shot in the evening at Crown Hill Cemetery in downtown Indianapolis during a photo club photo walk.  I brought various film cameras to test & play with.  This camera was pretty beat up and many of the shots had pretty bad light leaks.  Very lomography-like.  The film door on the camera had to be forced open & the film advance was not smooth.  Shot with a roll Mitsubishi MX-III 400 film.  I got the camera at a local Goodwill Outlet, so what do you expect.
Posted by Steven Brokaw at 9:00 AM