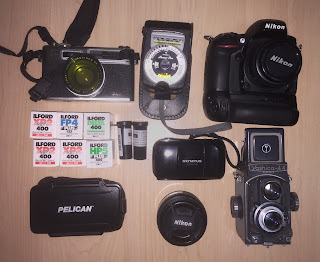 I'm in NYC attending to some family matters, and guess what?  I have all day Saturday free.  Hmm, what to do? What to do?  I know, street photography.  I came prepared.  I'm primarily going to shoot film, but am bringing digital too.

I was going to take a small kit, but I decided to bring 4 cameras.  Here's what I brought.  One note, I did switch out one camera from the photo at the last minute.  The kit

I know it's a lot.  Most people will bring only one camera / one lens, but I wanted to play with film with an SLR, a point & shoot and a TLR.  I also wanted to bring a workhorse digital camera (that I use in the studio)

I plan to spend about 10 hours just walking through the city.  Once I run out of film, I'll switch to digital....

Here we go!  I'll report back with pictures.
Posted by Steven Brokaw at 11:43 PM No comments:

Another Try At Sprockets - My Thoughts on the Setup 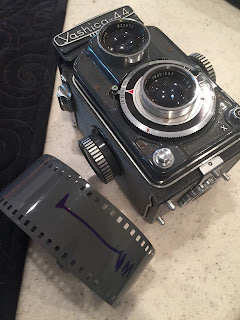 My first go at shooting with sprockets on a Holga 120N was "quasi" successful.  It was a good test, but the quality was just OK.  Do I give up and hold my head low you ask?  Why no, lets give this another go.  Why you might ask?  Just like everything with my film photography...it's just for giggles.

OK, this time I've decided to use a Yashica 44.  I was given this camera by a friend and I've never shot it before.  The problem is that it uses 127 film.  Since I don't have any 127 film (medium format), I figured it would be a good candidate for SPROCKETS.  Right on.

OK, here's what I'm going to do based on a test I did tonight with some dead film.  It's probably more complicated than it's worth, but like I said above, it's just for fun.  Note, this is all going to be in a large black changing bag.  First, I'm going to open a cartridge of 35mm film & unwind it.  Next, I'll tape the film ends on both sides of a 127 spool (I bought one on eBay).  Next I'm going to roll one side onto the spool and while holding it in place put it in the camera and load the other spool in the receiver side.  Then I'll close it up.  Out of the bag I'm going to tape up all up to minimize light leaks. 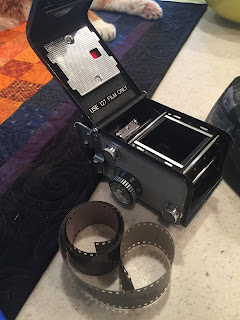 Posted by Steven Brokaw at 12:04 AM No comments: