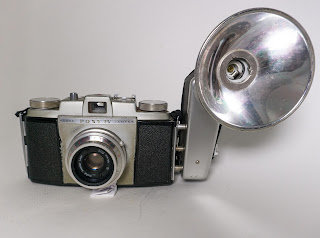 Several month ago I was in the Indianapolis Midland Antique Mall.  It's a fairly large antique collective that has some pretty pricey & nice antiques.  I've gone there a few time to look for vintage film cameras.  It's kind of hit and miss, and many times the cameras I find are overpriced.

Well, during my last visit I found this Kodak Pony.  It's a cool rangefinder manual camera.  Very hipster.  $30 all-in including a flash gun (which by the way I have flashbulbs that work for this camera).  I checked it out and it looked clean.  Mechanics all seemed good.  A bit rough looking with natural wear & tear, but thats all cosmetic.

The camera comes with a 44mm f/3.5 Kodak Anastar Lens.  Aperture from f/3.5 to f/22.  The lens has 3 zone focus groups which makes it really easy to set.  The thing that's unique is that the back of the camera comes with a "guide" that has 5 graphic pictures / descriptions.  As an example it has a full sun, and says "BRT SUN SAND SNOW".  There are corresponding numbers under the icon.  As an example for full sun the number is 14 described as the exposure value.

The way you set the exposure is to use the 2 dials on the lens barrel.  One is the Shutter Number (corresponding to B to 1/250).  The other dial is the Lens Opening Number (corresponding to f/3.5 to f/22).  Each has a series of numbers which corresponds to speed & aperture.  You simple move the numbers until they total the number under the icon.  Using the Full Sun icon you move the dials so the total of the 2 numbers equals 14.  You'd have to see it.

Of course if you know exposures or use the Sunny 16, you can eyeball it.  This is how I often use manual cameras.  I know what apertures & speeds to use based on the ASA.   That's what you get when you use a light meter in studio and shoot film as a goof.

Anyway, I shot a roll of Kodak BW400CN around town.  It WORKS!

What's weird there's a cold shoe, but no PC port.  Not sure how you would fire an external flash.  That's where the flash gun comes into play, and I've tried it...it works.

Fun camera.  Completely impractical, but you will get stares...especially if you use the flash.  I'll use it again.

Here are some photos

I stopped my shooting a re-rolled the film and by feel immediately new that the film leader had not been properly been attached to the takeup reel.  After about 2 turns of the rewind handle the film went slack.  I opened the back and it was fully re-rolled.

The takeup real operates in a "backwards" manner (it doesn't move the direction of the advance handle) and I "thought" I loaded it correctly, but guess I didn't.  Oh well, it was a test roll anyway.  I'll reload it tonight and put a bit of extra care in my film loading.  If it still doesn't work then I break out the gaffer's tape.  No mere camera is going to defeat me!!!
Posted by Steven Brokaw at 4:36 PM No comments:

Email ThisBlogThis!Share to TwitterShare to FacebookShare to Pinterest
Labels: 35mm, 35mm Film, Film Is Not Dead, Pentax, Pentax ME

Pentax ME - It's So Cute 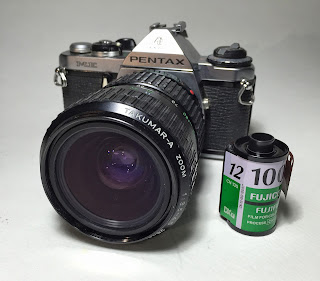 I was reading about film cameras the other day and read about the Pentax ME.  Several articles raved about how small and simple it was to operate.  Just a basic manual focus aperture priority-centric camera.  I said, Steve, you need to have one of these.  I said, Steve, you're right.  So, guess what, I jumped onto eBay and purchased one via Buy It Now.

First impression - the first thing I noticed when I felt the camera after unboxing is how small it truely is.  It's clearly the smallest of my SLR film cameras.  It's really just a bit bigger than my digital Sony A6000 walk around camera.  However, it's rugged and with the lens quite heavy.  Actually, the camera is almost too small to hold comfortably.  I don't have really big hands and even for me it's a bit dinky.  That's cool however.

As a side note, I was up in Chicago this week and went to Central Camera.  They had several Pentax ME's for sale and none was cheaper than $150 with no lens.  So I felt good with my purchase even if the eBay purchase was just so-so.

Anyway, I popped in a few fresh A76 batteries and it appears to work just fine.  Film loaded smoothly, seals appear tight, but like the description indicated the hotshoe is toast.  That's OK.

I loaded the camera today with a 12 exposure roll of FujiFilm 100, and I'll let you know how it works!  More to come.

Posted by Steven Brokaw at 9:21 PM No comments: 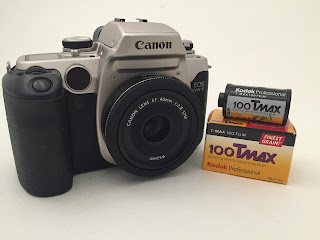 An exception was made this past week.  During the week (as mentioned in my earlier post) I picked up a Canon EOS Elan II from a work colleague.  It had a 2nd brand "kit" lens on it.  The lens wasn't particularly fast, and I wanted a prime.  I didn't have any Canon prime lenses that would fit, so I went down to my local camera store, Roberts Camera, and purchased a Canon EF 40mm f/2.8 prime, pancake lens.  It's not much wider than a normal lens cap.

The plan was to use the camera during this past weekend's fashion shoot in studio for behind the scenes shots.  Therefore, I purchased 2 rolls of Kodak 100 TMAX.  I planned to use the camera with studio strobes.

It will be interesting to see how the photos come out.  I used an Elinchrom EL-Skyport trigger to fire my studio lights, and metered the light to f/9 ASA 100.  It worked out pretty well, once I got the settings cooked in.  It will be interesting to see the quality of the photos.  The film will need to be sent out because right now I don't have chemistry to process pure B&W.

Stay tuned to this channel! 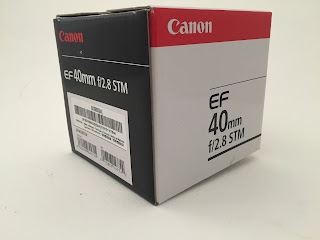 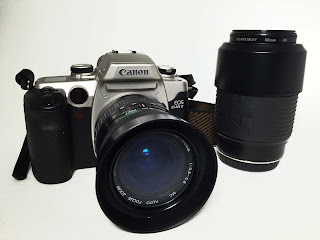 One of my next cameras up will be this SLR beauty, a Canon EOS Elan II.  One of my section heads at my day job know that I like to use film cameras, so he gave it to me.  I told me today that he was cleaning up his house and came upon this film camera that he hadn't used for over 10 years.  He had absolutely no desire to keep it, so I was happy to give it a new home.

There was a 1/2 developed roll in the camera, so I swapped out the battery (he had a spare one in the camera bag) and force rerolled the film.  He had no clue what was on it...fun.  I gave it a very quick dry run and it looks good to go.

Groovy.
Posted by Steven Brokaw at 12:03 AM No comments: 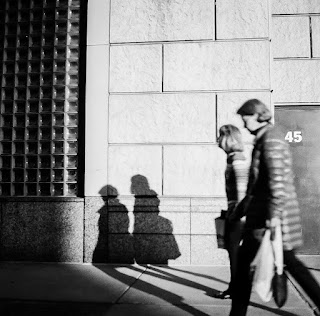 The Yashica-Mat 124G is a groovy camera.  A classic TLR medium format camera.  I took it out during a recent photowalk.  My photowalk companion was using a digital Fujifilm X100s.  I decided however to go old-schoolie film.  Loaded with Ilford XP2-400 120 styled film.

This camera is super simple to use.  I basically just parked myself between 2 parked cars with the sun to my back.  I snapped a few shots while people walked into my field of view.

Here is a shot where I focused on the wrong place or had the aperture to shallow.  The shadows are tack sharp, but the subjects are a bit out of focus.

I'm going to take the camera out again shoot a couple more rolls. 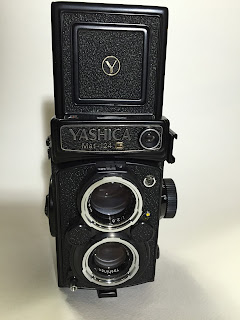 Posted by Steven Brokaw at 12:40 AM No comments: