I found this fun toy camera at my local Goodwill.  Yes, I agree why would anyone throw this beauty away?  No problems I rescued it.  It has toy camera all over it with it's all plastic body & lens and no features.  Oh yes, it does have a manual flash.

I popped in a roll of expired (not cold stored) Kodak T-Max 400 and fired away.  I even took it to a camera club Christmas party.  I was the talk.  After about 12 shots the shutter release button stuck in the depressed position.  Couldn't advance the film.  No problems.  A good smack on the palm of my hand and the shutter release button unstuck.  I had to do this on the last 12 or so shots. 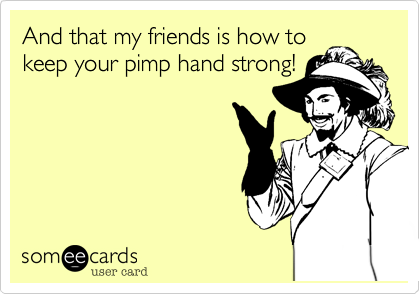 Anyway, I made it through the roll, and face palm I opened the back of the camera without rewinding the film.  Film photographers know that stupid feeling.

I closed 'er up and rerolled the film.  I didn't want those last 3 photos anyway.  I was surprised in good light (remember I was only using 400 ASA film) the quality was as expected.  Kind of creamy as might be expected with it's fine Chinese manufacturing of the 90's and it's plastic lens.  Right up there with toy camera stardom.  It will however end up in my "used" box because I don't want to have to go around whacking my camera ever time I take a picture.  Some photos, and few of the ones that have open back light leakage.  Enjoy

Posted by Steven Brokaw at 10:53 PM No comments:

Over the holidays I stopped at a Goodwill Outlet I had only been to once.  Not sure if I would find any film cameras, but I was wrong.  I scored big.  I found an Olympus Stylus Zoom 70 & a Nikon N8008. 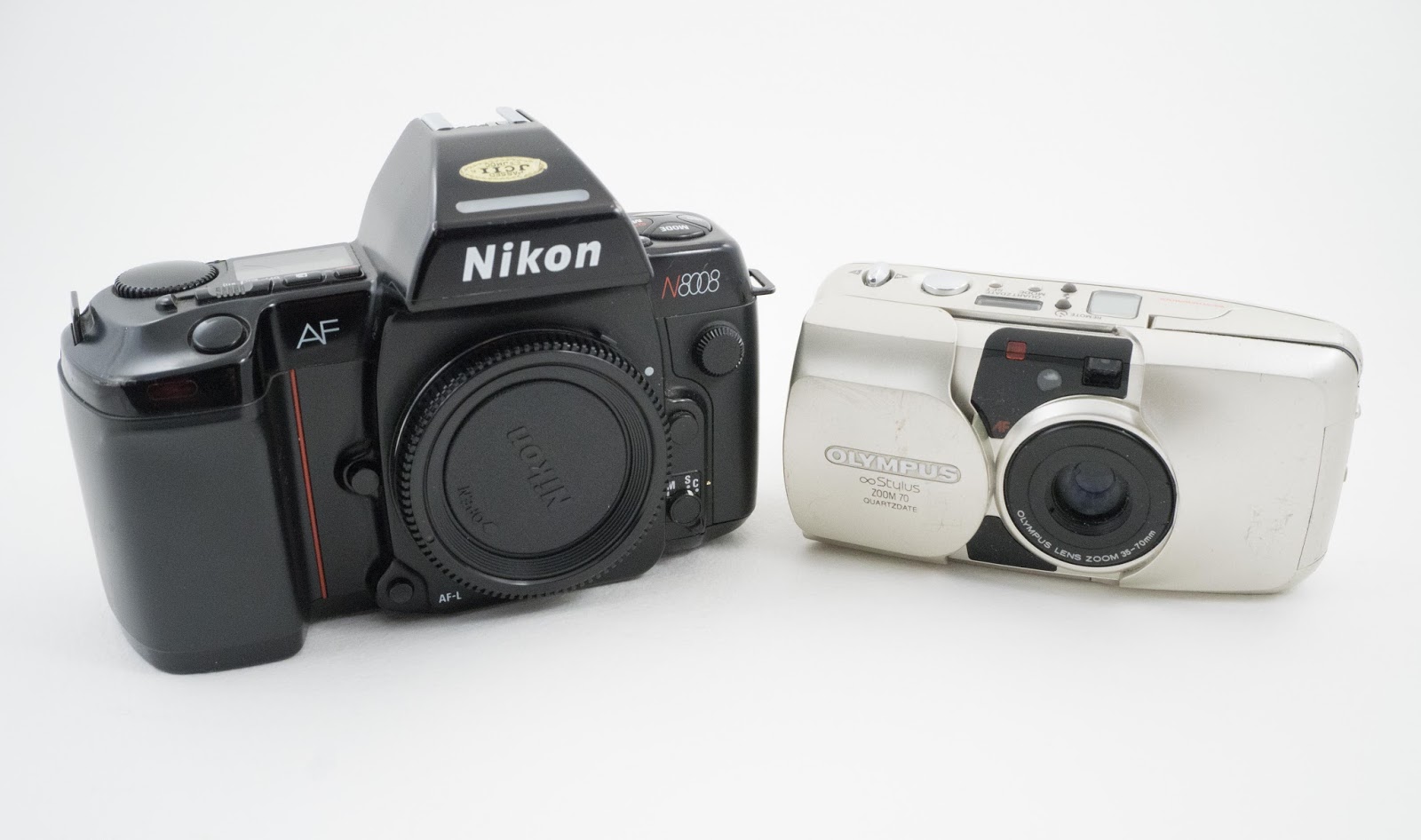 The Olympus is an advance point & shoot a bit bigger than my other Olympus Stylus cameras.  It's a bit scratched up, but looks good to go.  The Nikon was in surprisingly excellent shape.  I've never had an N8008 but have shot Nikon SLR's & DSLR's for a long, long time.  This one looks in excellent condition.  I simply changed out the batteries and put on one of my many Nikkor lenses and it looks good to go.  I'll give it a film check soon. 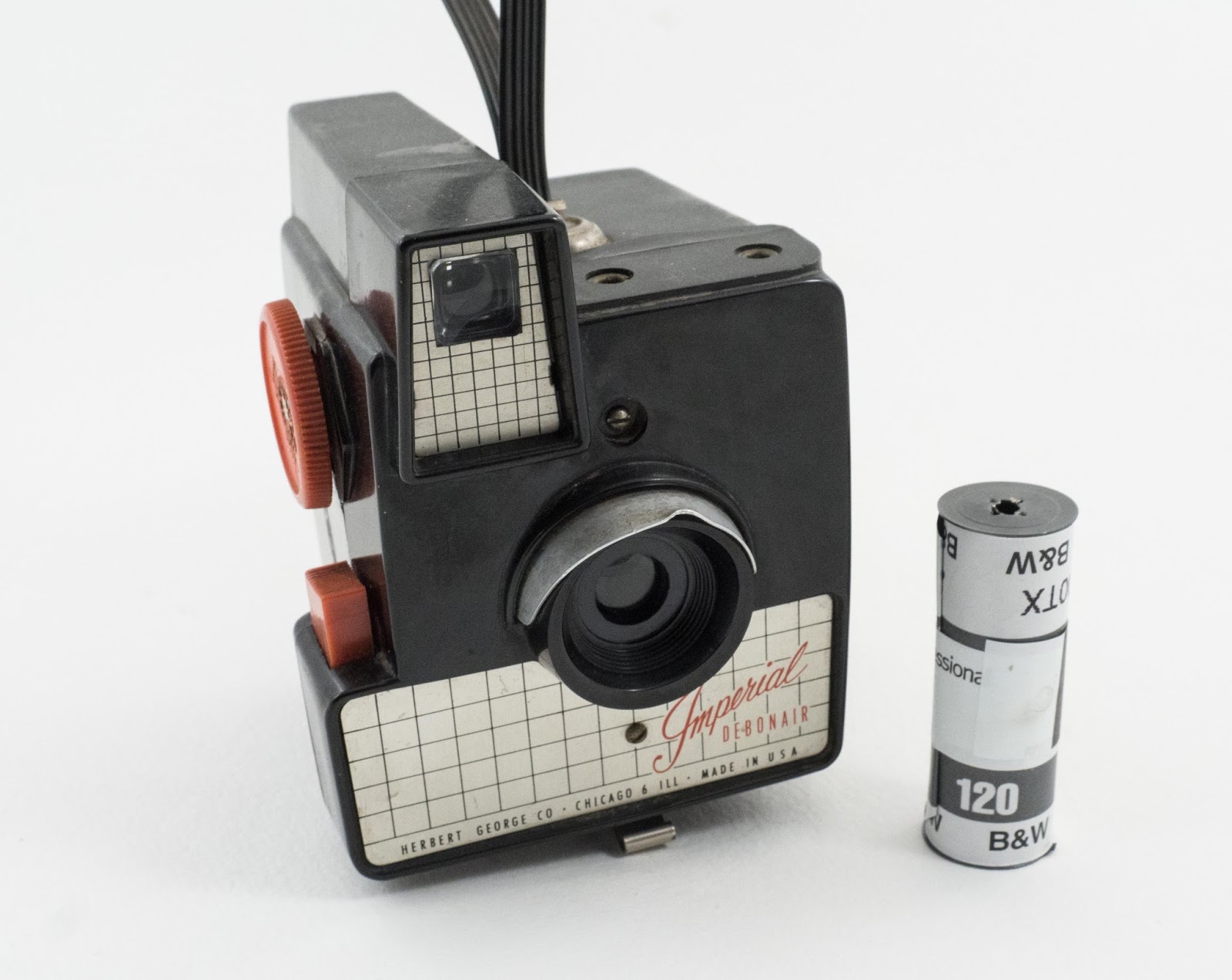 I bought this Imperial Debonair as part of a film camera lot on Ebay.  I don't recall how much it cost but doubt it was more than a couple of dollars.  An unusual looking camera somewhat similar to a Kodak Brownie.  The difference is there is a look through viewfinder.  This is a medium format camera that uses 620 film.

I knew nothing about the camera, or the company that sold them, Herbert George Co.  It looks cool however.  A very 50's, 60's look.  When purchased it was in rough shape.  Looks like it was either heavily used or just thrown around.  I cleaned it up as much as possible, and put it in my "to be used in the future" box.

The challenge is unlike my Brownie, I couldn't fit a 120 roll in it.  There was a 620 spool already in the camera, but I didn't want to roll my own, and 620 film is either hard to find or expensive.  About a month ago, I placed an order with The Film Photography Project store and decided to buy a roll or 620 film.  This is rerolled Kodak 400TX 120 film.

I loaded the camera up which is straight forward and easy to do.  Because of the cracks on the seams I sealed it up with black electrical tape.  After about 4 shots the winding knob was becoming very stiff and ultimately wouldn't turn.  Hmmm, I took it in a dark room and opened the camera up.  The spool had popped off the winder.  I snapped the spool back on and closed it up.  I took 2 more shots and the same thing happened again.  I repeated the open / close routine.  One more shot and the camera was toast.  I couldn't get it back on the winder, so I took the film out and rolled it up.  I think there were at least 2 more photos remaining.

So end result I took at least 5-6 shots that I think will come out.  The film tore slightly at that point (I noticed this when I rewound the film), so I doubt The Darkroom can process the film.  I'll send it in for processing soon and will report back.
Posted by Steven Brokaw at 1:30 PM 1 comment: 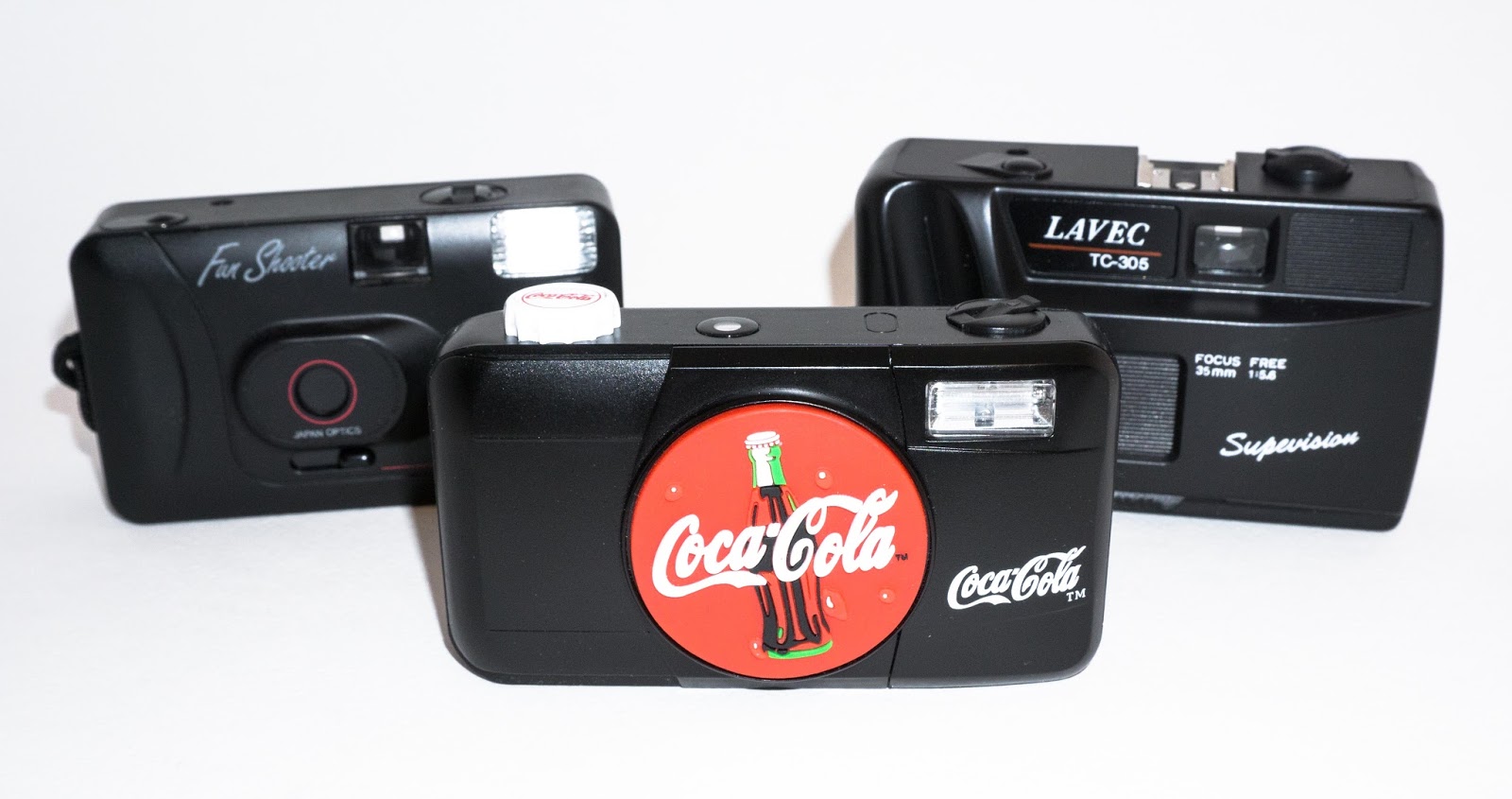 I stopped at Goodwill tonight on my way home from work.  Why?  Well, because I find film cameras on the cheap.  Scored tonight.  I found the following three 35mm point & shoot film cameras.  All of about $5:

I really like the Coca-Cola camera.  Very retro, although it's dated 1999.  Look forward to shooting with them.

Posted by Steven Brokaw at 10:30 PM No comments:

I'm shooting a found (don't remember where I got it) medium format Imperial Debonair. A retro looking plastic camera. Unlike a look down Kodak Brownie this camera has a look-thru viewfinder.  Shoots 620 sized film. This film size is hard to find. I bought a roll online from Film Photography Project store and loaded it up. After 5 shots the film jammed. I opened it up in a room with the lights off. The top spindle had popped off. I snapped it back on, and shot another photo.  Jammed again.  Opened it up, and put the spool back on.   Hopefully I can finish the roll. 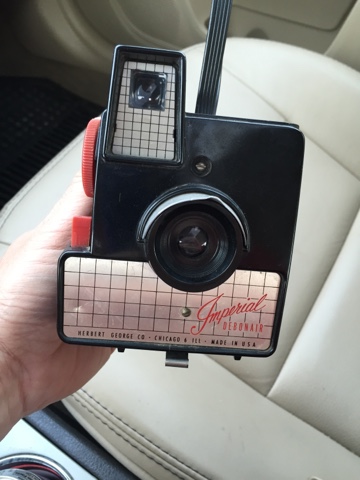 Posted by Steven Brokaw at 4:28 PM No comments: