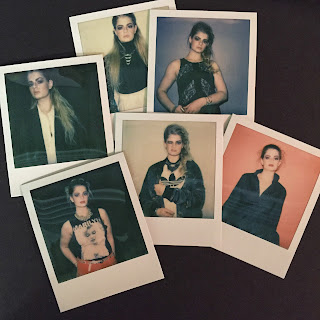 On the digital side of the house, which means my fashion / beauty photography side I did a shoot this past weekend for a fashion magazine.   Full creative team was involved.  As always I decided to pull out my trusty Polaroid Silver Express and a pack of Impossible Project 600 Color and take a shot of each look.

This is Gen 2.0 film so it's still a bit creamy and soft focus, but I still enjoy the process.  If nothing else I get to dazzle the young models by using a camera older than they are.

Just for giggles, instant giggles.
Posted by Steven Brokaw at 11:30 AM No comments: 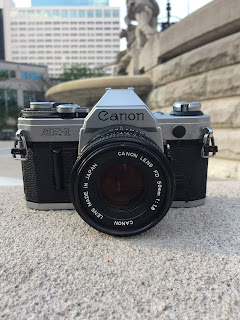 I picked up the all manual beauty, a Canon AE-1 from a camera club swap meet for free a couple of months ago.  Yes, let me repeat.  FREE.  The 50mm lens alone is worth a few bucks so I snapped it up.  I loaded it with a battery and it works perfecto.

I've been shooting film point & shoots and medium format film cameras lately so I hadn't given this guy a try.  I did this past weekend and tonight.

During one of my fashion shoots in the studio this weekend I decided I would also take several shots of each clothing look with film.  So I loaded a roll of FujiFilm Superia 1600 into this camera and took about 24 shots.  I wanted the higher ASA because I didn't want to use studio strobes, just light in the studio and outside.

The camera worked well.  The light meter seemed very responsive.  Because I had about 12 shots left I decided to take it downtown and do some street photography while the sun was still bright.  I simply cranked the speed to 500 to 1000, the lens aperture to 16-22 and shot away.

Now for the tricky part, I'm going to process the film myself.  Fingers crossed.
Posted by Steven Brokaw at 10:26 PM No comments: