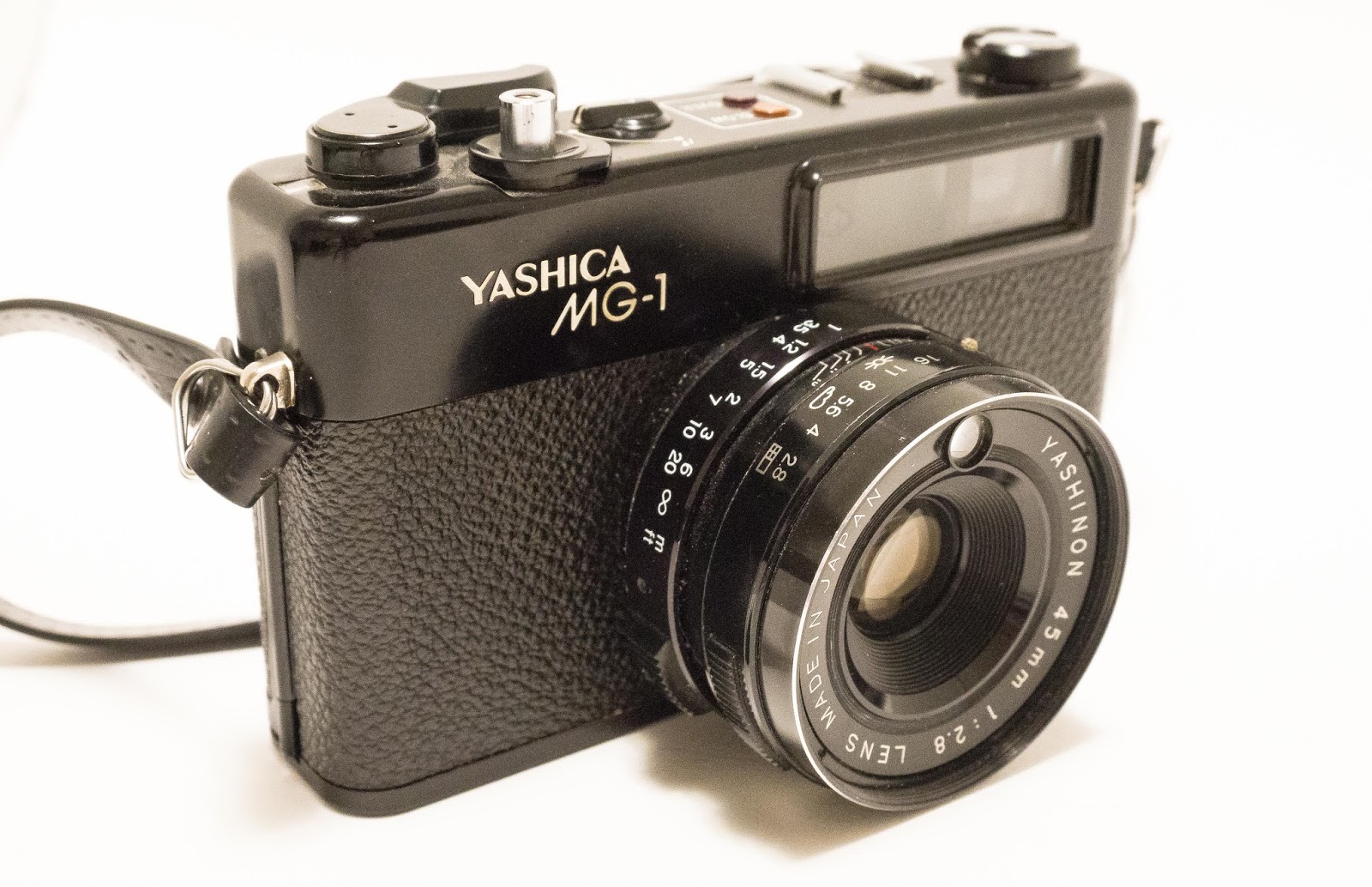 The next camera up for review is this beauty.  The Yashica MG-1, black version.  I really enjoy this camera.   I have both the MG-1 version and the Electro 35 GSN.  More on that camera later.  The Yashica MG-1 is a big 35mm film rangefinder.  I consider it a poor person's Leica.  Super cool camera.

I picked the MG-1 up last year at the Irvington Flea Market in Indianapolis.  I bought it for $20.  It was super clean, but it didn't have a battery so I couldn't check the light meter or check if the speed properly set.  However, I was willing to take a flier.

The battery is a 5.6V mercury type.  Not made any longer so I bought an equivalent at BatteryPlus, and POW it works.

So here are the specs.  The camera totes a Yashinon 45mm f/2.8 lens.  A perfect street photography lens.  This is an aperture priority camera.  You simply set the aperture and the camera sets the speed.  There is a simple light meter with red & yellow exposure arrows in the viewfinder on the top.  You simply 1/2 push the shutter release and if no lights come on you are good to go.  If the red arrow comes on, simply turn the aperture ring the direction of the arrow (or you will be overexposed).  If the yellow arrow is illuminated open the aperture or you will be too dark.  There are corresponding lights on the top of the camera.  ASA range from 25-800 which is set on the bottom on the lens.  Aperture is f/2.8 through f/16.  Shutter speed from 2 seconds to 1/500 second.

There is a hot shoe and when you set the little knob on the top from Auto to flash you have a 1/30 sync speed.  I find this weird because this is a leaf shutter so you'd think it would be faster.  One good thing about the shutter...yep, super quiet.  No mirror slap on this camera...no sir.

Here is a photo of the top of the camera and the back.  Very clean 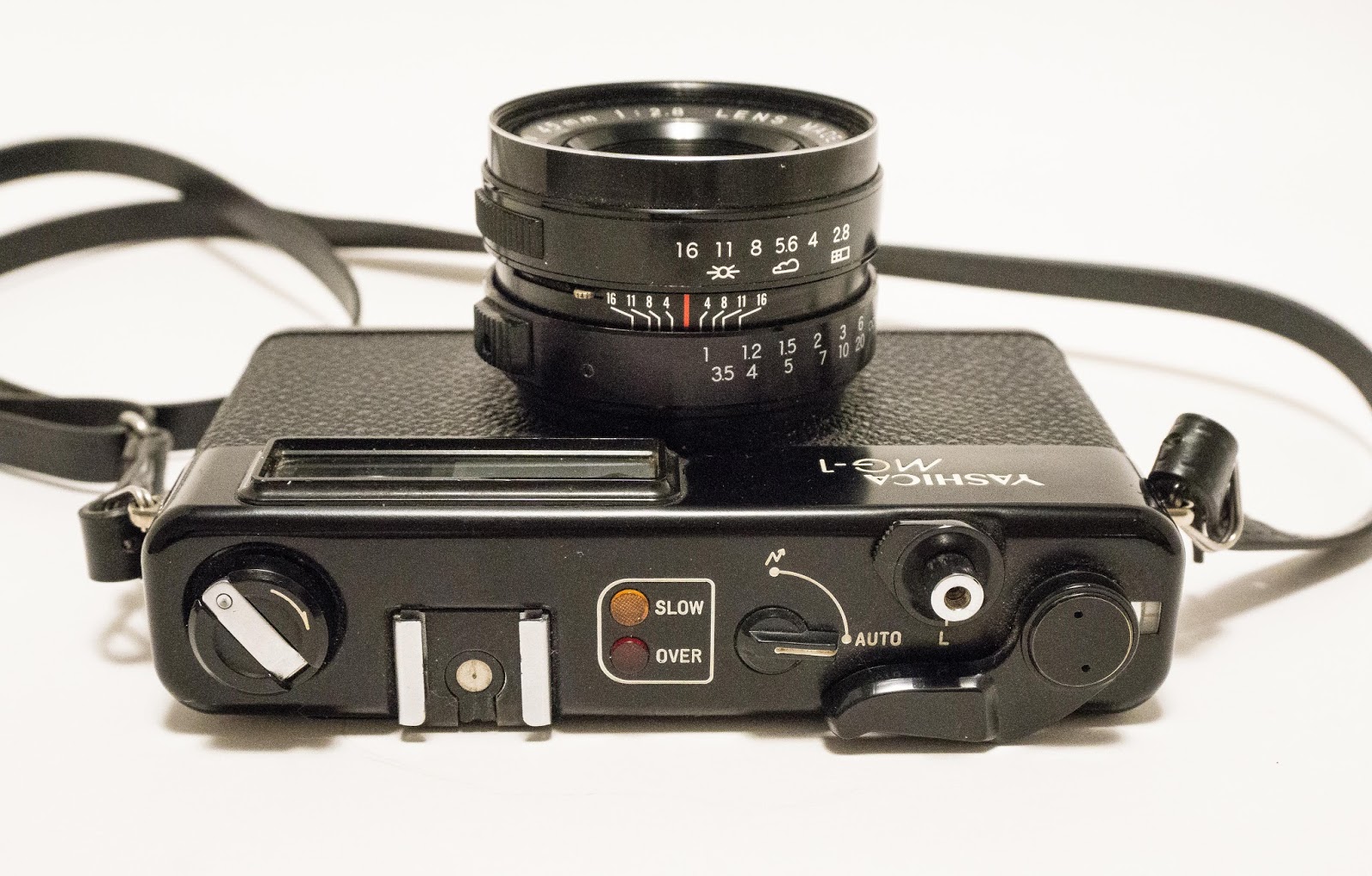 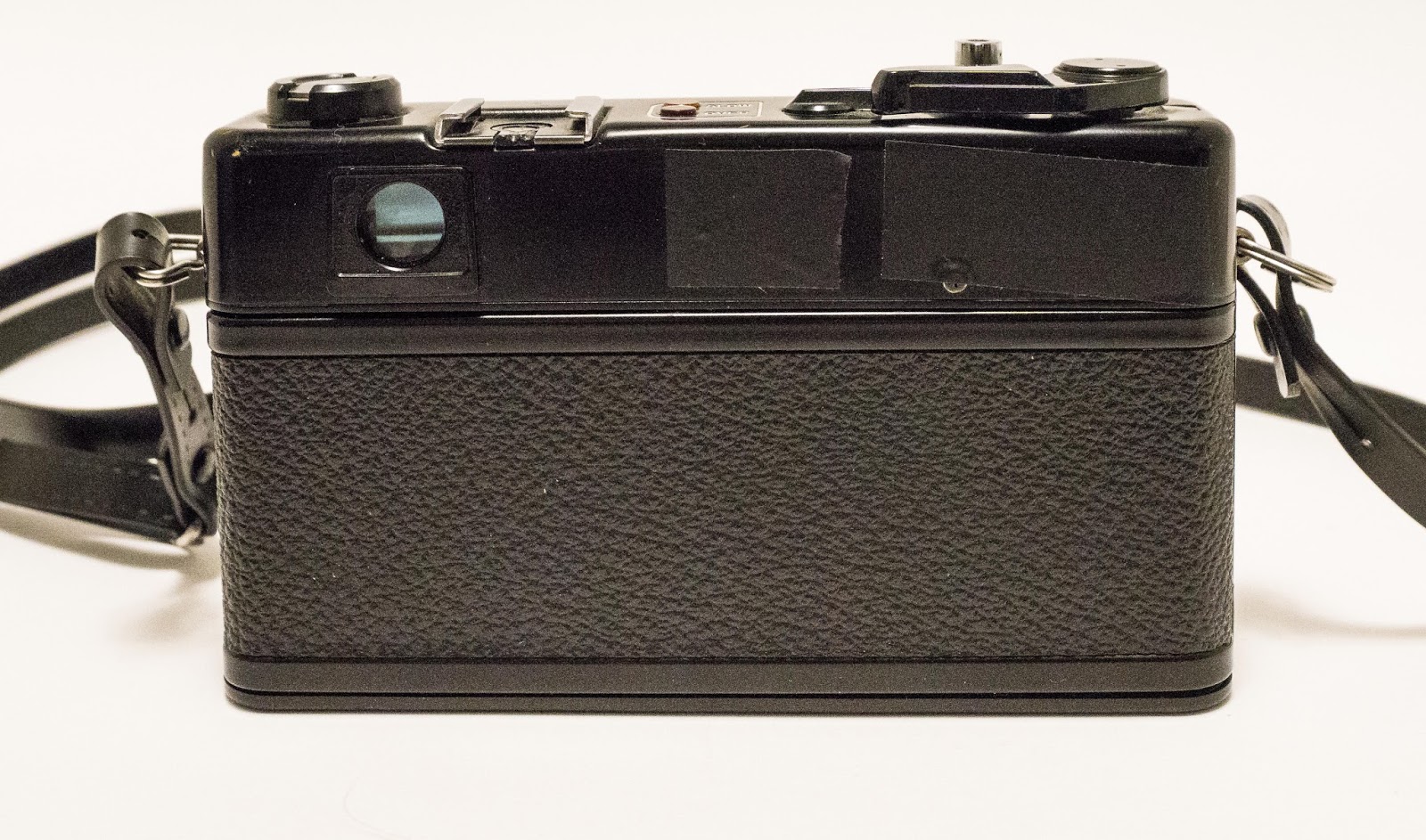 I've run multiple rolls of film through this camera.  It does have a few light leaks that appear now and again.  However, the camera works fine.  At first I thought the light leaks were due to the film but it always happen so I imagine there is a seal issue.  I've taped the camera up a few times with electrical tape and that seems to help, but that's a pain.

Bottomline, this is a sweet, cool looking camera that's simple to use, but not much setting flexibility.  Perfect for street photography.

I recently ran a roll of Mitsubishi MX-III 400 color film through it and had good subtle colors.  Here you go: