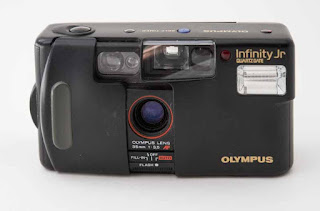 Next up is a boxy little 35mm point & shoot, an Olympus Infinity Jr. This is another Goodwill find.  Spent only $1.99. When I purchased the camera there was no battery so I couldn’t tell if it worked.  However, I gave it my standard “found camera” going over. It looked clean so I bought it.

The camera is a standard point & shoot.  DX coding. Almost all features are automatic.  Autofocus, auto-flash, auto-film advance, and auto-film rewind.  The only feature that can be adjusted is the flash control.  You can set it to “fill-in”, “off”, & “auto”.  There is an obvious self-timer button on the top of the camera.  I measured it at 12 seconds.  There is a simple red light that is on when the self-timer is set and flashed with about 2 seconds to go.  There is a good slide cover over the lens with a rubberized grip.  The grip allows you to slide the cover open and close easily. 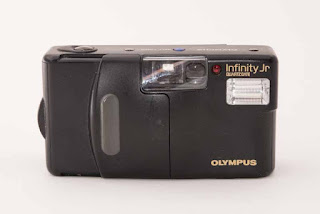 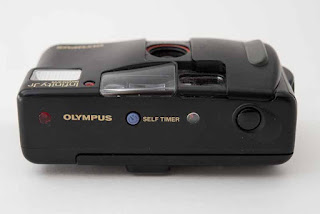 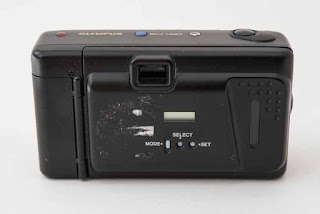 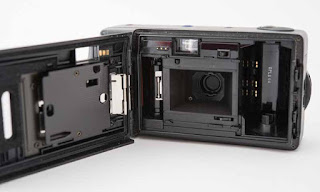 The has a boxy sleek look and your finger falls easily on the shutter release button.  The camera is a bit awkward feeling to hold, but that’s probably just me.  Someone with big hands might have a problem.

I loaded the camera with a roll of Fujicolor Superia X-TRA 400.  A standard color film.  I used it during a recent model shoot.  About ½ of the time the flash went off.  Lots of red eye with the flash.  Quality was all over the map but that was because I used the camera is several different lighting situations.

Bottomline, it’s a good little camera.  Nothing special, but a reasonable film point & shoot if you can pick one up for a few dollars.  I wouldn’t go out of my way to buy one.

Posted by Steven Brokaw at 4:00 PM