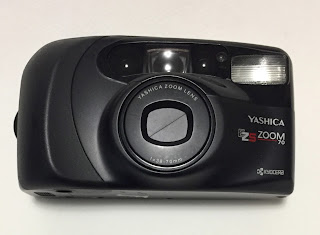 I picked up this Yashica EZS Zoom 70 at a Goodwill store.  A fairly straight forward, limited feature 35mm film point & shoot.  It's got a cool look and fits easily into my hand.  A bit bulky for my taste for a point & shoot, but I wanted to give it a go.  I've always had good luck with Yashicas.

The camera was super clean when I got it.  Battery compartment completely clean, lens clean and operated smoothly.  I probably paid less than $3.

I decided to take it to a recent model test studio shoot.  I've gotten into the habit of bringing a film camera during my test, fashion and model shoots and popping off a few frames.  I've started a series on my Facebook page called "Girls On Film".  Get it, the Duran Duran song...??

Anyway, I shot about 1/2 roll of Ilford XP2 Super 400 film during my shoot with model Anastasiya Finogenova with LModelz Model Management.  I just had her pose casually against various backgrounds.  In all cases the flash fired (set to auto) which gave it a somewhat blown-out look which was cool.

I developed the film myself and scanned it using my cheapo Epsom V370 scanner.  I REALLY like the results.  Totally surprised at the quality and vibe from the film camera.  I'll definitely use it again (this weekend maybe??).

A couple of photos of Anastasiya...just cropped in Lightroom and a touch of Clarity added. 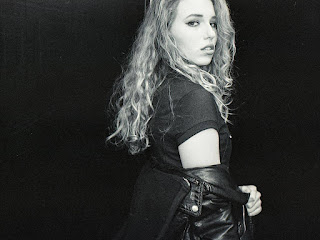