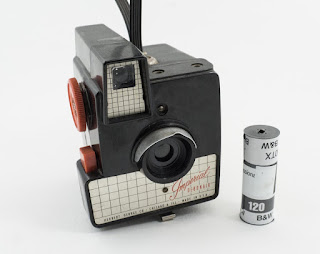 This beauty is an all plastic, Bakelite, camera which falls squarely in the "toy camera" range today.  Looks somewhat like a Kodak Brownie, and I suspect they were made as a competitor.  This is a 620 film camera.  This camera is all manual, and as a matter of fact there are no features to put your manual camera skills to test.  You just load a roll of 620 film, point and shoot.

This is a rangefinder which makes it simple to use.  My camera had cracks in the case, but nothing a bit of gaffers tape couldn't fils.  I loaded a roll of 120 film rerolled onto a 620 spool that I purchased from The Film Photography Project store and got going.  After about 6 shots however the film must have slipped off the sprocket and jammed.  I was able to "slap" it back in place, but when I advanced the film it tore, and locked up.  I simply rerolled the film.  No reason to open the camera up in the dark and try to get it going again.

This is a fun little camera with a cool 60's vibe.  Very hipster.  Dig it.