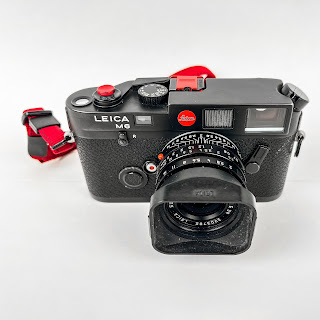 I purchased a Leica M6 Classic 35mm film camera approximately a year ago. It's the camera I've lusted for years, but finally had the opportunity to buy one. It is my current favorite film camera even though it's not the most advance, it's almost completely manual, and honestly it doesn't take the best photos if compared to my more advanced SLR's.

However, the M6 fits my film photography style perfectly.

There are many blogs posts, articles and write-ups that discuss the specs so I won't go into technical details. If you want a deep dive I'd recommend the following article by Emulsive.

My Leica is an M6 Schwarz Classic. It was "crafted" in 1991. It's all black sporting the classic Leica red dot logo. I purchased it with a Summicron-M f/1.2 35mm lens. The lens was made in 2000. This is a perfect film street photography kit IMHO. This is what I primarily use it for, although it's also a perfect setup for landscape photography. I also recently purchased a Canon Serenar f/1.8 LTM 50mm (with an adapter) as my 50mm option.

I first saw the camera about 1 1/2 years ago at a camera swap / meetup hosted by a local fashion magazine / studio. I had a table selling some excess studio equipment. A gentleman (who was not a photographer) had a table across from me selling about 6 camera travel cases full of high end camera equipment. He was entrusted to sell the equipment on behalf of his uncle's estate. Amongst the equipment was the Leica.

He was selling the M6 with the Summicron lens and asking between $5,000-6,000. He had done his homework on prices, but not on the working condition or marketability of the equipment he brought. I could tell the Leica had good bones, had been well used but not abused. However, it clearly hadn't been used in some time. It looked rough.

The gentleman let me look it over and test it out. I could tell the shutter speeds were off, the leather was coming loose in several places, the viewfinder was fogged and the film advance action was very stiff. I told him thanks, but it was out of my budget.

Throughout the meetup I thought a few times I should buy it. However, I was serious about my budget so I just went about my business. There were several people who ogled, handled and negotiated for it, but no serious buyers. By the end of the meetup the Leica M6 hadn't sold so he came over and asked about my budget. I said $3,500. I thought he would just laugh, but he didn't. He said he would think about the price, try to shop it around, take it to a few camera stores. If it didn't sell he would get back with me. I gave him my contact information, but didn't expect a followup.

About 3 months went by and I didn't hear anything. I forgot about it. Then to my surprise he contacted me. He had taken it in to a local camera store for grading and gauge their interest. The store recommended sending it to Leica for repairs and a CLA. They offered what I suspected was a somewhat low price (market less their risk adjusted sales / inventory commission). He told me if I would split the cost of repairs he would sell it to me for my $3,500 offer (body plus Summicron lens).

I had my M6 for $3,850!! I think this is was a very fair deal and he said he was super happy it was in the hands of someone who would use it versus simply resell it.

I've put approximately 20-25 rolls of assorted film through the M6 so far. I've used it for street photography trips to NYC, Cincinnati, Chicago, and my home town of Indianapolis. I also took it with me this past October during a hiking vacation in the Colorado Rocky Mountain National Park. It's almost always in my camera bag. It's been superb. Easy to use, reliable and consistent quality.

As a side note, the Leica M6 has a loyal following and a large demand so Leica recently re-released the M6 with only moderate upgrades. The M6 is available again! The new Leica M6 is essentially the same camera as mine which as of this writing is 32 years old.


Bottomline, the Leica is a VERY well build, high end film camera well suited for street photography, general snapshots and landscape photography IMHO. The price (both used and the new version) puts it out of reach of most photographers so it's still a niche camera. However, I'm VERY happy I was able to get one!