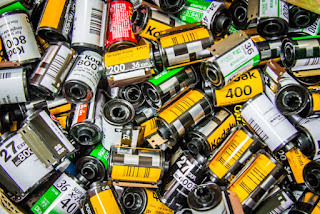 Sometimes a 35mm film you use isn't exactly what you think it is. There is an active business within film photography of repackaged, rebranded or white label film. The film may be branded with a cool or interesting name ... you think it's a unique or new film stock ... however it's actually an established or bulk order film that's simply been repackaged and rebranded. Several films stocks are widely used for this purpose like Fomapan, Vision3 and Kentmere.
IMHO this is NOT a bad thing. It actually makes 35mm film more readily available. Pricing is sometimes better than competitive films.  Also rebranded film often have interesting names, cool marketing, fun packaging, etc. All of this adds vibrance to the industry. Or, you may want film options vs the typical Kodak, Fujifilm or Ilford. Repackaged films often gives you access to films not available like expired, oddball or large bulk amounts into 35mm sizes. I shoot repackaged film regularly.
HOWEVER, I also like to know what I'm shooting. This allows me to be a better consumer and spend my film budget wisely. Also it helps me know the characteristics of a rebranded film, especially if I've shot the underlying stock previously.
So, I keep a list of films the market has indicated is rebranded or repackaged. This list should NOT be considered all inclusive and unless the seller has specifically indicated the film manufacturer please use caveat emptor with this list. Also this list ONLY includes films that are repackaged or rebranded. It DOES NOT include films sold by the manufacturer (like Film Ferrania P80, Kodak Portra 400, etc.) or film stock  reformulated but not produced by the seller (like JCH Streetpan 400).
Here's the list and confidence factor since most film sellers don't indicate what the underlying film stock is:
Confident:
Low Confidence, New to List or Being Researched:

I regularly update the list so stop back if interested, or if you have information to add or include please let me know.