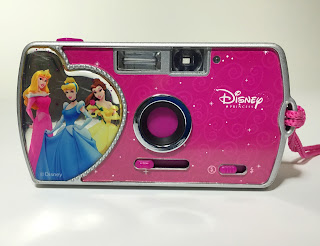 "Why" you ask, "Why not" I say.  I found this pink beauty at Goodwill for 50 cents and I had to have it.  The Disney Princess camera.  Toy film camera extreme.  I have zero clue as to the camera specs.  But here is what I do know.  It has a manual flash with a simple on/off switch.  Rangefinder slightly off of the lens axis.  Lens cap switch (you know so you don't scratch the lens), and it shoots 35mm film.

I loaded her up with a roll of FujiColor Superia Xtra 400 color film and shot a few pictures around the studio, and a few photos as behind the scenes during a recent model shoot.  True to it's toy camera status the quality stinks, focus not all that sharp and the flash was a bit of a hit & miss.  But hey, I got a few stares.

Posted by Steven Brokaw at 8:18 PM